Review of The Puppet Maker's Bones 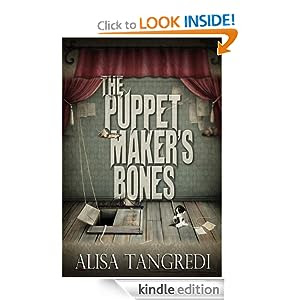 An angel of Death in the City of Angels: A psychopath kills a young boy, a quiet teen, then an entire family before setting his murderous desires on Mr. Trusnik, an elderly shut-in from across the street. But Mr. Trusnik is not like other people. Although very old, he is far from helpless. He is an angel of Death...and he is waiting.

I enjoyed this psychological thriller/fantasy cross. After all it had so much that I love - puppets, a Czech setting, history and a large chunk of fantasy. The author Alisa Tangredi has really researched her puppet and Czech history backgrounds to create a totally authentic feel to her descriptions. The book is beautifully and intelligently written.

The book might disappoint those people who read it expecting violence and gore, but if you like intelligent books which do not conform to the expectations of genre then you will find much to enjoy. I really enjoyed the cross-genre nature of the book - the mix of historical fantasy and modern day thriller.


The only reason I would give this book four stars rather than five is that I have a problem with the role of the other main character the young psychopath Kevin (what is it about that name  in fiction?) and the set up of the final showdown. As can be seen from the book blurb above, we know that Kevin is not going to kill Pavel, that the showdown will be very one-sided. We have also seen enough to work out what might happen.

Kevin is also much less well-drawn than Pavel, who is wonderfully drawn - complex, flawed and hurt. In some ways this is a study of loneliness - not only has Pavel Trusnik been confined to his house for decades, but he has been denied the comfort of human touch for his entire life, something which drives him to the verge of madness and possibly over it. Alisa Tangredi is a very intelligent writer and I am sure could have done more to develop the parallels and contrasts between these two angels of death - one unwilling and one willing - and to create more suspense for the reader.  But regardless of this quibble The Puppet Maker's Bones is wonderful book and I recommend it to you.

It's available on Amazon as a paperback and as a kindle (click the image above to go to the site).


I was given this book as a free copy in exchange for an honest review.
Posted by Zoe Brooks at 15:14